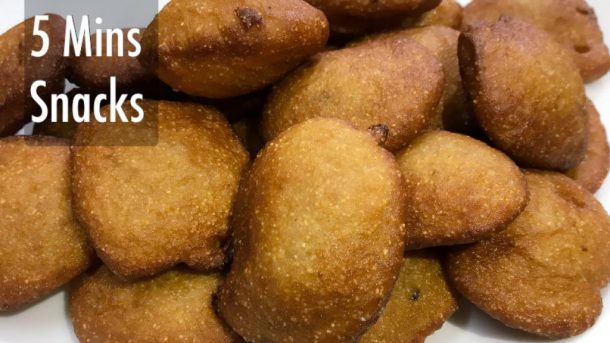 Whether you’re bingeing series or running late for the office, when your stomach wants munchies, you can’t deny that. People often skip breakfast or give fast-food to their kids for tiffinbecause of their tight schedule. But none of them is good for their health. Instead of starving badly, what if we make something easy and tasty quickly?

Today I’ll share some easy and tasty food recipes that you can make within just 5 minutes. You won’t even need to rush to the supermarket. These easy to make recipes will not only save your time but also keep your stomach full and happy. So without wasting any more time, let’s see the quick food ideas that would make your cookinglifeeasier and smooth.

It’s not easy to resist the sweetness of a red apple. If you have apple, cinnamon and microwave at home, you’ll just need two minutes to make this delicious dessert. It’s a sweet dish of course, with the health benefits of apple and cinnamon. It’s ideal for afternoon snacks or breakfast.

Cut the apples into small cubes and bake them for 2 minutes in the microwave. Once the apple cools down, add two pinches of a cinnamon crush on it. And your apple cinnamon dessert is ready!

Coconut is not usually treated as a fruit for some valid reasons. Firstly, to unwrap and break a coconut you need industrial equipment. Jokes apart, but despite its problematic design, coconut is a treasure of nutrients. So today I’ll teach you how to make a delicious coconut bar in just 5 minutes. This recipe only needs 3 ingredients- coconut, milk and sugar.

To make a coconut bar, you’ll need finely grated coconut. Add one and a half cups of milk and two spoons of sugar and let the entire preparation boil until the texture looks like a dough. Now put something heavy on the dough to flatten it, and then cut it according to your mood. If you already have grated coconut at home, the dish wouldn’t take more than five minutes.

Another recipe for you that requires only three ingredients. If you have never tried this version of paleo, try it this weekend. All you’ll need to make a paleo protein bar are –butter, dairy-free choco chips and coconut flour. It’s a 5 minutes snack as I have already said and you wouldn’t even need a microwave to make it.

The recipe is very easy. First, add all of three-ingredient to a bowl. Now whip it up well. And here’s your paleo protein bar ready to munch on.

Having a bowl of salad once a day can keep you healthy and energetic all day. And what could be better than having a colorful chickpea salad at breakfast?

To make it, you won’t even need five minutes. It’s simple, easy and healthy. You can also serve the salad after a full course meal at a dinner party. Party food doesn’t necessarily need costly ingredients or complicated processes. It could be something simple and delicious like a bowl of chopped chickpea salad bursting with flavor and color.

Usually, brownies are not considered a healthy food, for their ingredients. But this one would surprise you for sure. It’s an easy five minutes snack that would lure the elders to the kids. Peppermint fudge brownie is dairy-free and gluten-free, and it’s ideal for those who are vegan. From the first bite, you’ll taste the chocolatey flavor with peppermint. If you haven’t tried this mouth-watering dish, try it now!

Nuts are a high protein source. No matter whichever nut you eat, your health would be affected positively. Despite having such health benefits, sometimes they lack taste. Raw peanuts don’t taste that nice. So how about if we just modify the taste with a delicious flavor? Sounds good, right!

To make caramelized nuts, you’ll need only two ingredients – caramel and peanuts. It’s a two minutes snack that would keep your stomach full for the next two hours. I hope these easy recipes would save your time and also save your stomach from starving. As doctors say, whenever you feel hungry, try to eat something, let it be a chocolate or a banana. Because if you take care of your health, it will take care of you.